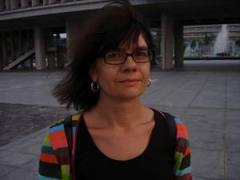 Een fragment uit de inleidende tekst van de vertaalde versie van haar boek:
"There are two types of feminism today. Traditional feminism relies on the evidence of sexual difference, understood as the dualism of masculine and feminine. This feminism analyzes relations between the two sexes in terms of power and domination without ever questioning the presupposed dualism within the imperative of equality, parity, and reciprocity. Another, more recent, feminism, sometimes called ‘post-feminism,’ coming out of American gender studies and queer theory, challenges the binary division of the “genders.” There are any number of possible sexual identities and the man-woman dualism is but a cultural construction. Examination of this construction reveals that the heterosexual matrix is not a natural given but rather an ideological norm whose function is to regulate and control behavior and identity codes.


Until now the putting into question of sexual difference and the shift from one feminism to the other have never been considered from a philosophical point of view. The idea of “gender” has never been taken back to its ontological source. Queer theory has never been confronted with deconstruction. The two intellectual traditions, American and Continental thought, have never been compared with each other. This books seeks to engage this dialogue.

Starting from my own experience as a “woman philosopher,” I explore a new resistance by woman to the constant violence – theoretical and political – to which she is subjected all over the world every day. Beyond the dispute over “essentialism” and “anti-essentialism” (is there, or is there not, a “specificity” or “essence” of woman?) which has raged for years in post-feminism and which most of the time unleashes a pointless terrorism in what should be a debate, I seek recognition for a certain feminine space that seems impossible, yet is also very dangerous to try to deny. It may be that woman is only defined negatively with respect to the violence that is done to her and the attacks on her essence, but this negative definition nonetheless constitutes the resistant stock that distinguished the feminine from all the other types of fragility, from overexposure to exploitation and brutality.

Of course, more than sexual difference itself, it is important to emphasize the differences that exist between women. I recognize that it is both abusive and unproductive to attempt to impose a single model on all the diverse political and social situations associated with the term “feminine”. This is why I start from a concrete situation, my own, as a “women philosopher,” a French “woman philosopher.” Here, in four interrelated texts, I explore the “meaning of the feminine” as well as the impossibility for woman to accede to philosophy without being immediately eclipsed as a subject."