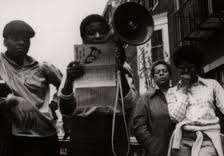 You might be surprised to know that a number of us here at Black Feminists were amazed to hear you declare in your latest New Stateman blog that “feminism is, and to an extent always has been, a white, middle class movement”.

We’re not sure the feminists of the Indian Chipko movement in the 1970s or the Southall Black Sisters would agree either.

It seems that you’re most worried about the “issues of race, class, religion, sexuality, politics and privilege…fracturing feminist dialogue,” even if your fantasy universal feminism actively marginalises the experience of anyone who isn’t you.

You play into the damaging myth that feminism is for an elite and narrow group. In reality many people who don’t actively identify as or even distance themselves from the F-word still have feminist views. Similarly many people know how intersectionality affects them and others around them, even if they don’t consider themselves to be intersectional.

In recent weeks intersectionality – or whatever you want to call it – has been deemed irrelevant and literally not worth giving a shit about. Now you’ve kindly told us it’s too academic. If we’re being honest, both come across as excuses to avoid talking about intersectionality itself and dealing with how it affects people. Given recent events, perhaps you can see why many black feminists and others are angry.

Intersectionality may be an academic term that has spilled into common usage among many feminists, but that doesn’t mean that the concept it refers to isn’t real and worthy of discussion. It’s merely shorthand for experiences that many people recognise and talk about – those points where race, gender, sexuality, ability, class and so on come together. And while language is important, most feminists only really use that kind terminology with others who know what it mean.

In obsessing over the use of one word, you not only miss the point (intersectionality could also refer to education), and imply that a vast swathe of people are stupid, but worse still you actively dismiss the views of people of colour and others.

In many respects, intersectionality actually tries to address accessibility, so it’s dishonest to impose a false hierarchy of accessible language first, then maybe followed by dealing with those minor fringe issues of racism, ableism and classism (you know, if we have the time after we’re done having a go at mythical “educated women [who] to want to keep feminism for themselves”).

Being called out isn’t nice, and pretty much everyone experiences it. Most sensitive and aware people would say ‘thanks for your opinions, we’ll take it on board’ or ‘I wasn’t aware that was an issue, I’ll bear it mind in the future’. But not Vagenda, or Caitlin Moran. What we’re seeing is childish foot-stamping and privileged feminists closing ranks to protect each other from criticism from those they are marginalising.

The real accessibility problem is not the use of one word among perhaps more academically-minded feminists, but the closing down of debate by so-called ‘big name feminists’."