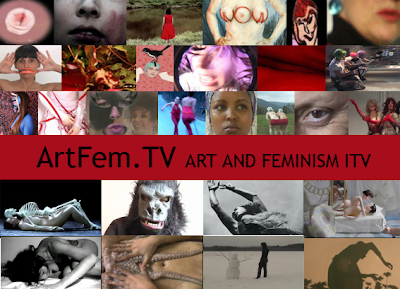 "ArtFem.TV is an online television programming presenting Art and Feminism. The aim of ArtFem.TV is to foster Women in the Arts, their art works and projects, to create an international online television screen for the creativity, images and voices of Women. [Een overzicht van enkele  kunstenaars die bij ArtFem.TV aan bod komen, vind je hier] ArtFem.TV is a non-profit artist-run ITV and media art portal about Art and Feminism founded by Evelin Stermitz in the year 2008.


ArtFem.TV in Context of Art and Feminism

Feminism and feminist art finally came to the forefront as a public debate during the times of various political and liberation struggles in the late 1960s, spurring a discourse to rethink the position of women in our society. Women were encouraged to act and react publicly, and art, as a primarily public issue, became a strong vehicle for this discourse. One of the main questions was […] what makes women artists and their art different from male artists. This was a main discourse in the United States, Great Britain and Germany, which has spread over to many other cultures since the 1970s. Women reflected upon the patriarchal social system, in history, in art history and in current affairs. It was a great benefit for later developments and changes, although it was a big struggle. Feminist art cannot be understood apart from this struggle. […] The term ‘feminism’ in connection with art should be used in the sense of understanding art works by way of a female perspective, which, while not excluding the struggle, is more concerned with creating a recognition of a female position, in either counterpart or rather subject position. This position is a critical engagement with gender issues and views art as a socio-political matter.


It is a generally accepted fact that in Western culture’s patriarchal heritage the preponderance of art made by males and for male audience often transgressed against females, or used females as passive objects. The male studio system excluded women from training as artists, the gallery system kept women from exhibiting and selling their work, as well as from being collected by museums (albeit somewhat less in recent years then before). Linda Nochlin wrote her article “Why have there been no great women artists” in 1971, and gave an impetus for numerous published histories of women artists. A tremendous momentum for feminist scholarship concerning women in the arts ensued, offering the work of many more women artists overdue recognition.

[…] The first two decades of art and feminism are seen as a revolt against male artists and their politics of production, consumption and targeting art, as well as the male-created gaze and male-dominated society. Female artists now find themselves concerned with evolving art in an aesthetics and with strategies including the social discourse. Feminist art has gained a relevant status and is highly approved and legitimatized as an ongoing debate. These new ways of viewing the position of women and women artists in a socio-cultural context and in a critical philosophic manner is no longer defined as a revolt against patriarchal systems, rather it is accepted as a debate concerning disclosure and deconstruction of sex and gender in a patriarchal system, and reflects both construction and discourse within an historical context. […]


New media offers new possibilities and chances, but also comprehends old restrictions and patterns. Works in the field of new media, feminism and art are a way to subvert the public economic tradition and offer new views, perspectives and possibilities to use new media with female agendas to undergo a shift from the male technocratic society, where knowledge, money and power go in one hand to strengthen male interests and visions. Cyberfeminism can be an answer to tech-malestream, as VNS Matrix (Francesca da Rimini, Josephine Starrs, Julianne Piercel, Virginia Barratt) the early Australian cyberfeminists stated: “mission to hijack the tools of the techno-cowboys and remap technoculture with a feminist bent” in an active and not passive user role.

Core cyberfeminist actions are aesthetic/artistic strategies, not only as deconstruction of representations of gender, but also of traditional concepts on the net and in the institutions of tech-culture. Terms of these practices are to recode, remap, relocate, reconstruct. Cyberfeminist projects do not work as a massive front in a manner of counter cultural movements, they are subversive, infiltrating the mainstream with ironic breaks, citations and deformations.

Within this context, ArtFem.TV is an attempt to break with a male dominated net-culture and media landscape to highlight women’s emphases in art and media works."