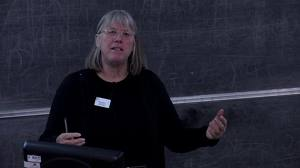 
"In recent years, as environmentalists have examined the link between women's subordination and the degradation of our natural world, the relationship between feminism and ecology has become a crucial one. In Feminism and Ecology, Mary Mellor, tracing ecofeminist activism from the Love Canal demonstrations to socialist ecofeminism, provides a comprehensive introduction to the ecofeminist movement and its history. Mellor examines the connections between feminism and the Green movement, outlining the contributions of major participants while contextualizing them within a wider range of debates. Looking past the shortsighted assertion that women and men stand in equal relation to the natural order, Mellor discusses the association of women with biology and "nature," illustrating how the relationship between women and the environment can help further our understanding of the relationship between humanity and the natural world. Against trends toward radical economic liberalism, global capitalism, and postmodern pluralism, she argues that within the feminist and Green movements is the basis of a new radical movement."
Meer over Mary Mellor en haar visie:
"Mary Mellor is Emeritus Professor in the School of Arts and Social Sciences at Northumbria University in Newcastle. She was founding chair of the Sustainable Cities Research Institute at the University of Northumbria where her main research areas were financial inclusion and alternative economic development. She is a founding member of the newly formed World Economics Association and is on the editorial board of several journals. She has served as a Councillor (Tyne and Wear Metropolitan Council) and has been a member of a number of organisations and networks around peace, green, feminist and socialist issues. She has also been actively involved in co-operative development and has published extensively on money and finance, financial exclusion, co-operation, sustainable cities, ecofeminism and social/ist economics.

Her most recent books are The Future of Money: From Financial Crisis to Public Resource (2010) and The Politics of Money: Towards Sustainability And Economic Democracy (2002 with Frances Hutchinson and Wendy Olsen)."

"Mary Mellor argues that ecofeminism has a major contribution to make to understanding the current destructive relationship between humanity and nonhuman nature. She describes her work as ecofeminist political economy, which sees women's work and lives as standing at the intersection of destructive economies and the natural world. Her concern is with women's position at the boundaries of economic systems. Ecofeminist political economy sees the externalisation and exploitation of women and nature as linked. For women, their marginalisation from what is identified as ‘the economy' is not accidental. While women are present in the economy in large numbers as consumers and employees, their lives as women is excluded. That is, the particular experience of being a woman in a gendered society. Central to this is women's work. Women's work is the work that has historically been associated with women, both inside and outside of the market place. Women's work is the basic work that makes other forms of activity possible. It secures the human body and the community. If a woman enters formal economic life she must leave her woman-life behind; childcare, domestic work, responsibility for elderly relatives, subsistence work, community activities. Economic life is therefore limited and partial in relationship to women's lives.

Green economics, Mary Mellor argues, can be strengthened by an understanding of ecofeminist political economy. Exploring the gendering of economic systems can provide new ways to think about economic systems and develop alternatives. The role of gender in the construction of economic systems means that ‘the economy' does not relate to the totality of human active labour and natural resources, what has been described as the real economy. What the modern economy represents is a boundary around limited activities and functions in which the process of valuing and male-ness are connected. The more work is valued, the more male-dominated it becomes. The more necessary and unremitting it is, the more female-dominated it becomes. One thing ‘the economy' does not represent is the provisioning of human society or the sustaining of the natural world. Mary Mellor argues that what is needed is an alternative way to construct a provisioning economy that does not exclude women's work or the natural world. To help construct an alternative, her recent writings have brought together ecofeminist economics, social economics and theories of money issue and circulation as the basis of a democratic, equitable and ecologically sustainable economy."